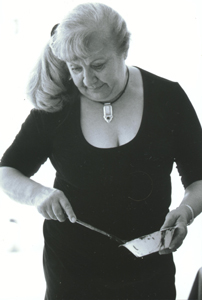 No question but the painting of Jenik Cook - and hardly less the work she realizes in other media (most notably ceramics) -is abstract-expressionist. But it is not necessarily Abstract Expressionist. That is, however much it may evince the DNA of mid-century American "action painting," or even European counterparts such as tachism, l'art informel, or CoBrA, Cook's art only incidentally revives the method, much less the look, of these bumptious, scrappy art movements. Rather, to power her vision, she goes back to the roots of gestural modernism, finding dancing line, elastic contour, and fervid color in surrealism, in fauvism, in expressionism itself. The painting of Pollock and Kline, and of Fautrier and Jorn, gives Cook permission to work unfettered like this, and gives us the context to comprehend fully - even to empathize kinesthetically with - what she does. But she is not emulating, much less imitating, Afro or James Brooks in her graceful, muscular paintings on paper or rehashing Sam Francis or André Lanskoy with the rhythmic clots and scatterings of pigment that collect on her canvases (well, on a wide variety of more-or-less canvas-like support material). Look instead to Miro, Masson, Marc, or Münter, Pechstein or Picasso, Marcks or Matisse, for Cook's sources.

Indeed, look into Cook's own cultural heritage. The line that whips and loops throughout Cook's oeuvre, whether hurling forms across canvas expanses or tracing them on the sides of pots, whether describing slashing trails of pure pigment or the sinuous contours of human bodies, is no more a painted line than it is a written one. It is made less with the whole body - although one can sense a change of stance, a hip motion, in so many of these dancing whiplashes - than with the whole arm. These gestures issue from the wrist and the shoulder. They are in fact as much inscribed as painted. Their energy is not just telegraphic; it is calligraphic. If the vivacity of the image bespeaks Cook's Armenian blood, the rhapsodic curvaceousness of her line betrays her Iranian childhood. As comfortable speaking and writing Farsi as she is Armenian, Cook marries her disparate cultural sources -which of course now include the western European and American influences of her adult life - into an aesthetically cohesive mix with a surprisingly broad formal reach.

Perhaps the breadth of that reach, given the variety of sources, isn't actually so surprising. But it is always a bit startling to witness - that is, to be allowed to witness - an artist master such a conceptual and expressive range. Most artists have this range in them, but so many suppress it. For her part, however, Cook refuses to suppress her stylistic multivalency. Not only does she not limit her vision, but she uses that vision very consciously to drive her artmaking in as many ways as it needs to go. She may edit, but she does not self-censure. Her style, ultimately as coherent and personal as a signature, emerges from and among her plethora of approaches, approaches which themselves spring from her persistence, her prolific output, her knowledge of art, and her irrepressible verve. Jenik Cook's art springs forth -in several directions at once.